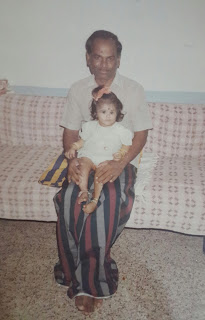 This still looks like yesterday grandpa.....
I'm sitting on your lap.........
26 yrs have passed by........
You showered the love and affection whic
h even my father failed to do... 😔
It's now 4 months since you left me forever...
Never thought that the accident would be so terrible to take you away from me forever....
The first day I spoke to you and the second day you were long gone forever.....
Everything I see today, reminds you to me.......
Can't still believe that you left us... 😔
Your place can never be fulfilled by anyone else in the world.......
Posted by Aishwarya.M.B at 9:15 AM No comments:


*This is an article which I wrote for my college newsletter Atulya.

Hi guys! Hope you are all fine and in a fit state for the next trimester after the stressful exams! Stress takes a crucial place in our brains while doing our program. We've been late to morning classes, working all night, preparing for presentations (If you really work in the team!), studying for quiz, mid-term, etc. All this really means a lot of stress.

Has anyone ever thought of ways which you could use to stamp out the stress you are experiencing presently? Have your ever thought of being like the ever cool people even in these situations? What do you think they've been doing? Its nothing but Smart Work.

So, now you'll be thinking that the title should have been something else! Hope you all know the 20-80 rule. Let me apply that in a different way, 20 percent of Smart Work leads to 80 percent of the productivity!

Classify your work into high and less priorities, talk less, don't give up your usual entertainments. Do your high priority work first. Concentrate on the work you do. You can finish up a 2 hour work in 1 hour with the highest level of concentration.

Manage your time well and don't ever postpone work. We might be thinking that there's ample time for a work to be done. But we might end up doing that work in the last minute. Trying to avoid this mess would be a great help.

Last but not least, don't skip your meals as it might badly affect your performance one or the other way. I've added this point, mainly because a lot of people here do that.

I'm not here to tell you how to do Smart Work, but I want to remind everybody that only Smart Work will help while doing an MBA.
Posted by Aishwarya.M.B at 8:38 AM 2 comments: 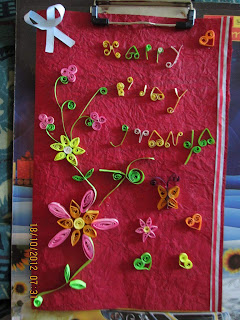 I made this card fully out of paper using Quilling! :) Thought of sharing!!!
Posted by Aishwarya.M.B at 6:51 AM No comments:

Hi friends! No post for a long time!
I got into PSG Institute of Management for MBA programme after cracking TANCET 2011 with colorful marks 46.8 and an overall state rank 36 :) :)

And guys believe me, its just awesome out here!
The hostel, food, college and everything!!!!! Really about 1000000 times better than Jaya Engineering College, Chennai where I did my UG.
All the subjects were new! Starting from the first day we had classes till 4pm and then it started extending till evening 6,7, 8pm depending on the classes...
Apart from studies there were a lot of extra curricular :)
Schedules were really hectic, but still we had outbound training trips to Anaikatti and Pondicherry :)
With that first trimester got over and stepped on to the second trimester.
So life is well and good for now :)
This is Aish signing off from PSG IM, Coimbatore ;)
Posted by Aishwarya.M.B at 7:17 AM 5 comments:

Lemme say first, I got into GSoC last year ie., 2010. I really enjoyed it and this year I will really be glad to help my juniors getting into GSoC 2011.

Step 1 : Learning a technology well, like PHP, Python, Qt, etc. You should really have the required knowledge in the technology to atleast develop a simple application. This will be possibly very easy for those who are very good at programming and those who do some own mini projects.
Step 2 : Make your hands dirty on a project which uses your well known technology.
For ex : I'm good at PHP, so I started learning about Drupal, Joomla and Moodle.
Step 3 : Choose an organization from the previous list of organizations (if the list is yet to be announced).
Start working with the project and get used to it. Start little coding too. Fixing bugs will also be good.
And please dont get disappointed if the particular organization isnt there in the list. This is because I was much comfortable with Joomla and Moodle, but those didn't participate in GSoC '10. But still you can choose accordingly later.
Step 4 : Start interacting with the community, ie., via the mailing lists and IRC.


Step 5 : Catch a mentor!! Yeah! Catching a mentor before applying is really a plus! This is how I caught my mentor http://lists.typo3.org/pipermail/typo3-dev/2010-March/039428.html See the next threads to see my first interaction with the TYPO3 organization.


Something which you should keep in mind before applying is that, you much consult your mentor and mention his name in your application (only if you have asked him/her about that and if they are ready to mentor). In this case, chances of getting accepted is more.
Posted by Aishwarya.M.B at 1:44 AM 6 comments:

Labels: getting into gsoc, GSoC Guidance, how to

This is probably a very LATE post... But still wanted to post it...
There are some of the situations i faced outside & inside the nimhans conventional centre(foss.in) which i didnt mention in my previous post about the conference...

On 30th, me and my junior XXX(i dont want to mention her name) reached bangalore by 1.30. went straight to her house, got some refreshment and then thought of attending the Volunteer Meet in which i was supposed to meet Shilpa Sequiera who was one of the Organizers of the Foss.in event.

The meet was at 6.30, so i was planning to start early. I called my junior to come with me, but she just told she cant, this was really a bad situation, coz i neither know the way nor the language.


Then she just came with me and told me to go by an auto, dont know how a typical Brahmin family is doing like this, coz we dont treat anyone like this coming to our houses, that too a girl, its really bad saying "go by yourself" in a very new place.

Started alone, by taking an auto. I thought the venue would be a little near, but from Murugeshpalaya it took nearly 1 hour to reach. and Rs.120 as fare. That was so long. Thought of leaving early from there. Met Shilpa and then came out at 7.15 pm, trying to cross the road and at last crossed it at 7.40, waiting for an auto, i was waiting and waiting and at last one auto came at 8pm who agreed to come only if i give him Rs.50 extra.   I had no other go other than giving him the money.In between, i was really in a mentality to cry out!!

Went to her house at 9pm, between didnt even get a call from her where i was, too tensed i was! Went home, called my dad and asked him to come fast and take me to the PG. he came at nearly 11.30pm and then i went to the PG, because of these mess, caught high fever and cold :-(

Caught a friend in PG, Sonali :) She was pretty cute and friendly too. Enjoyed her company. She came with me to the Nimhans Conventional Center and left me there by 8am. I was sitting at the registration desk. Enjoyed the place much. It was sometime later when i met Ramnish who was a friend of Arun Sag. Had nice time with him for the 4 days wherein my juniors always left me alone :P But had fever and cold all the time :( :( :(

Deprecated: Function ereg() is deprecated in /var/www/drupal/includes/file.inc on line 911

I got this nearly in 20 lines continuosly :P

A google search got me the following answer. This finally solved my problem.


Finally i added the following lines in my php.ini file

This finally solved my problem.

Aishwarya.M.B
I'm friendly n talkative... I read a lot of books! talkativness is the first thing u can notice in me...!!! on irc i'll be on #gsoc, #gsoc-india, #mukt.in, etc and my irc nick is aishumoorthy. i like asking lot of questions to the brainy(s)...!! & i answer too..!